Melodic-Harmonic Language in the Organ Music of Petr Eben


Afterwards, the interval structure of the theme keeps changing, the intervals getting bigger and bigger: fourths, tritones, fifths, sixths, even one example of a tenth in the next three of the themes’ appearances: mm. 46-49, 49-53, 53-56.  In mm. 69-72 appears the “widest” theme, where the intervals are mostly sevenths, but there are also some ninths and tenths (Example 3).

Finally, the “clean” variant of theme comes, the one closest to its Gregorian original, in mm. 74-77(Example 4).

The same melody/form building principle is used much more widely in the later cycle Faust.  In its entire second part – Mysterium, Eben plans a musical development based on gradual increasing of interval ranges. In the first measures (mm. 1-42) there are no other melodic (horizontal) intervals at all except small and large seconds, and the maximum harmonic (vertical) interval allowed is a small third. Fourths in the vertical are introduced first at m. 42, larger intervals at m. 43, while horizontal intervals’ progression grows slower - melodic small third appears first in m. 48, a tritone - in m. 51, a fourth - in m. 63, (in opposite order) a sixth - in m. 64, and in the same measure there is the first small seventh. Vertical seventh appears earlier, but it is not introduced as clear and as obvious as in m. 69 for the first time, in the right hand’s part, and the first time an octave is reached in vertical and horizontal is just in m. 89! The section starting from m. 89 seems to concentrate gradually on the seventh as a main building block, and starting from m. 97, there is rarely any other interval involved.
b.      increasing chromatization.
In Sunday Music one could interpret most of the chromatic treatment as tonal, functional alterations. Less so in Laudes; in the third piece of Laudes, there is the first appearance of black-white keys’ division of parts, where the right hand plays only on the white keys, while at the same time, the left hand plays only on the black ones, in mm. 72-76. While both parts are tonal and diatonic, when mixed they give quite a chromatic/dissonant impression.
Melodic-harmonic language in this cycle is much more dissonant/chromatic, and there are no longer “same key” finals seen, as in Sunday Music.
Further melodic development can be seen in the first of the Four Biblical Dances. The melody consists of only four tones, and they are used interchangeably, in seemingly random order, and with large leaps in melodic line, in mm.41 and 42. This quite unexpected feature becomes even more unusual by the fact that it is marked “ad libitum”!
c. Theme “wrapping”
Eben is very fond of introducing a melody “hidden” inside a chord. This can be seen in more than one piece. For example, one of the main melodies of the second piece of Sunday Music appears almost completely invisible, “wrapped” around multiple chords in mm. 96-99, after starting the chords’ section in m. 93. The theme appears clearly and distinctly just 22 measures after, in m. 121-124. The same compositional principle is used also in the Laudes organ cycle, in the first piece, where the second theme, which appears mm. 25-29, also is “wrapped” around the chordal structure in mm. 61-65 (Example 5).

d.      registration
In the second piece of Laudes we encounter Quint and Tierce over the fundamental 8’. This is a relatively unusual registration, giving a rather “mysterious” sound (note that the tempo marking is “Fantastico”).  The even more mysterious registration at the beginning of the fourth piece  emphasizes further the very unusual way the Gregorian chant is first introduced - in a “chopped” form, literally note at a time, in a tutti pedal part against a very quiet “sonorific” sound at the manuals (mm. 1-17, Example 6).

In the Four Biblical Dances, (number 3, Song of the Beggar with a Hurdy-gurdy) the organ is made deliberately to sound like a barrel organ (another example is the fifth piece).
When trying to follow Eben’s evolution through the years, one is startled to find out what changes have occurred in his melodic/harmonic thinking. While being always interested in tonality, he turns more and more towards interval-oriented thinking, symmetry and restricted-tone-usage complexes.  He also pays an increasing attention to coloristic features (in both his harmonic language and his original registrations), symphonic thinking while writing for the keyboard, and instrument-imitating techniques. His scores become increasingly chromatic, and in this instance he could be compared to Vierne. There is an increasing preference for interval-oriented thinking, operating with intervals in a very individual and intuitive manner. Sound complexes such as chords and multi-level, multi-line constructions become more and more significant. Eben’s organ works are large-scale, mural-like compositions, always with some kind of an underlying program and context, and are characteristic by their visual, theater-oriented nature. Starting as a traditionally oriented tonal composer, he creates music, which becomes very modern, having all the indications of a major 20th century creative musical thinker. 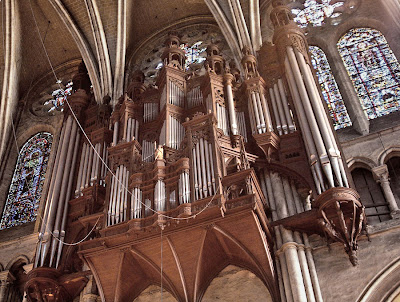